As I’m sure you’ve seen by now, German Pharma has collaborated with the Review Bros to bring you The Daily Driver. What is it? It’s a pe-workout like no other because of its UNIQUE and thoroughly researched combination of ingredients that will give you power and endurance, increased focus and mood as well as being fast absorbing to give you the desired effects, quickly!

The Daily Driver has 4 trademarked ingredients including AmentoPump, a not often used compound known for providing great vasodilation. The other doses of key ingredients have never been seen in pre-workouts before. So, what are these magic ingredients? Well, we’ve broken down each ingredient so you know exactly what you’re putting into your body and what their effects on your workout will be;

L-Citrulline, 8000mg - L-citrulline is one of the three dietary amino acids, alongside L-arginine and L-Ornithine which improves blood flow throughout your body (source). Consequently, it is often taken to enhance athletic performance, and vascular health. There are very few foods that have notable amounts of citrulline, watermelon being a notable exception. Research suggests that this amino acid can improve power output, a reduction in fatigue and improve endurance for both aerobic and anaerobic exercise. It's not known to have notable side-effects (source)

L Taurine, 1500mg - The key difference between taurine and L taurine is that Taurine is an amino sulfonic acid, whereas L Taurine is the most abundant and important isomer [chemical compound] of taurine. Your body produces taurine naturally in your liver from other amino acids. The main roles of taurine in your body are:

Pink Himalayan Salt, 300mg - Salt in pre-workout supplements? But, what does it do? Well, it turns out, salt is actually quite beneficial for athletic populations for many reasons, mainly due to the maintenance of fluid balance, but also as a potential performance enhancer. Some people describe pink Himalayan salt as one of the purest salts available, and say it boasts several health benefits (source). Sodium is an essential trace mineral found in salt. The body needs this for a variety of functions which are vital for peak physical performance. When we become dehydrated, our blood thickens, which means it carries less oxygen and has a knock-on effect on our kidney’s filtering system. This can cause issues for anyone, but particularly athletes. So, an athlete increasing their salt intake around a workout or training session may experience improvements in cardiovascular fitness, stamina, endurance, and better recovery mostly as a result of increase blood volume (source).

Amentopump, 200mg - AmentoPump® is the plant essence of Selaginella Tamariscina, which is said to directly enhance strength. AmentoPump® has some very interesting properties, varying from increased fat breakdown to vasodilation, which may also increase the body's ability to get nutrients into muscle cells. AmentoPump® is an incredibly potent and multifunctional ingredient. It has the added benefits for fat loss and insulin sensitivity improving, making it an optimal ingredient in any pre-workout or fat burner (source).

Betaine Anhydrous, 3000mg- Betaine anhydrous is a chemical that occurs naturally in the body. It can also be found in foods such as spinach, cereals, seafood, and wine. In recent years, betaine has been tested in many clinical tests aimed at its use in athletes. One of the first studies was conducted at Connecticut University in 2010. It was found that athletes who took 1.25 g of betaine twice daily increased their strength by 25% and muscle by 20%. It was also confirmed that betaine significantly increased factors affecting protein synthesis in muscles compared to placebo (Source). Moreover, it is incredibly fast-acting so, coupled with Caffeine Citrate, you’ll be feeling the benefits in no time!

Creatine HCL allows your muscles to contract with more power for an increased number of repetitions, increasing your anaerobic exercise capacity. Creatine HCL, therefore, allows you to train harder, for longer, and stimulate more muscle growth, resulting in an increase in muscle strength and size.

L-Tyrosine, 2000mg - L-tyrosine is one form of the amino acid tyrosine. It is a non-essential amino acid, meaning that you don't have to get it from food. The body manufactures it, using another amino acid, phenylalanine. Treatment with tyrosine may help humans perform in stressful situations, such as being exposed to extreme weather or being asked to perform certain cognitive tasks. Tyrosine may also help you stay mentally sharp when you have lost sleep. In one study, subjects were kept awake for over 24 hours. Those who took tyrosine performed much better on two types of tasks than those who took a placebo. The effect lasted around three hours.

Since tyrosine is involved in the production of thyroid hormones, you should not use L-tyrosine if you have a thyroid condition (source)

Alpha GPC, 1000mg - Alpha-GPC seems to increase a chemical in the brain called acetylcholine. This brain chemical is important for memory and learning functions (source). Alpha-glycerophosphocholine (alpha-GPC) is a cholinergic compound that is used for cognitive-enhancement, and to increase power output in athletes. It appears to also support cellular membranes, and may help prevent cognitive decline (source).

Rhodiola Rosea, 200mg - The medicinal compounds of rhodiola rosea come from the root of the plant and have been used to help treat stress, anxiety, mental and physical fatigue, and depressed mood. Rhodiola rosea has been classified by some researchers as an adaptogen, meaning that it helps to make you less prone to physical and emotional stress. Research has shown that this natural medicine may stimulate serotonin, norepinephrine and dopamine activity which is known to improve exercise performance (source).

Huperzine A, 300mg- Huperzine A is sometimes used to boost energy, increase alertness, and fight depression. It’s used in bodybuilding as a nootropic, meaning it boosts focus. It is touted as a workout enhancer and included in several combination supplements, including The Daily Driver (source).

Theobromine, 150mg - Theobromine is a molecule made by plants and stimulates blood vessel dilatation. It’s most famous for being one of the many compounds naturally found in chocolate, but it’s also in tea, among other plant products. Theobromine was discovered in the 1840s, in cocoa beans (source). The effects of theobromine have been less studied than those of caffeine but it is known that this molecule exerts some positive effects in different human pathologies. The combination of caffeine and theobromine have the same benefits without the side effects reported for caffeine, making it a real winner for a pre-workout as it minimises the ‘come-down’ of caffeine (source).

Di Caffeine Malate, 100mg - Di-Caffeine Malate is a patented form (Infinergy) of Caffeine that is 75% Caffeine, and 25% Malic Acid (source). It may be easier on the stomach, and it also helps with longer lasting energy as well as preventing the dreaded “crash” people may experience from caffeine use.

You can find Di-Caffeine Malate in products such as pre-workouts, fat burners, and nootropics. It is great for pre-workouts, as it helps with long-lasting energy. Instead of a huge rush of energy at the start of your workout, it trickles in and gives more of a ‘steady energy’ (source).

The Daily Driver has gone for a two-prong approach when it concerns the digestion element in the form of Bioperine and Astragin.

BioPerine, 5mg - BioPerine is a patented piperine extract, containing at least 95% piperine in a form that is well absorbed by your body. Some studies have suggested that BioPerine could support improved blood sugar management through various mechanisms.

For example, one test-tube study found that piperine increased the absorption of sugar from the blood into cells, which could help prevent high blood sugar levels. Although there are no official guidelines regarding how much piperine you should take, studies show that doses of 5–20 mg per day are generally considered safe and associated with minimal side effects (source).

Astragin, 50mg - What is Astragin important in pre-workouts? The gut plays a large role in our overall health and a healthy gut environment leads to improved nutrient absorption, a strong immune system, healthier weight levels, and it may also help improve sleep and mood (source).

AstraGin can have a profound effect on your ability to absorb beneficial amino acids, fatty acids, vitamins and phytonutrients (source). All that restorative sleep and increased protein synthesis could be especially beneficial for those looking to build muscle and boost athletic performance. The benefits may also be especially beneficial for older weightlifters as age can affect the efficiency with which the body absorbs some nutrients.

And there you have it! The full breakdown of the ingredients used in The Daily Driver and why they are complementary and beneficial to your workout, no matter what level of gym-goer you are. All of this, plus it tastes amazing… So what are you waiting for? Give this unique formula a go. Use code RB10 for 10% off your first order exclusively from Pro-hormones.co.uk. You’re welcome! 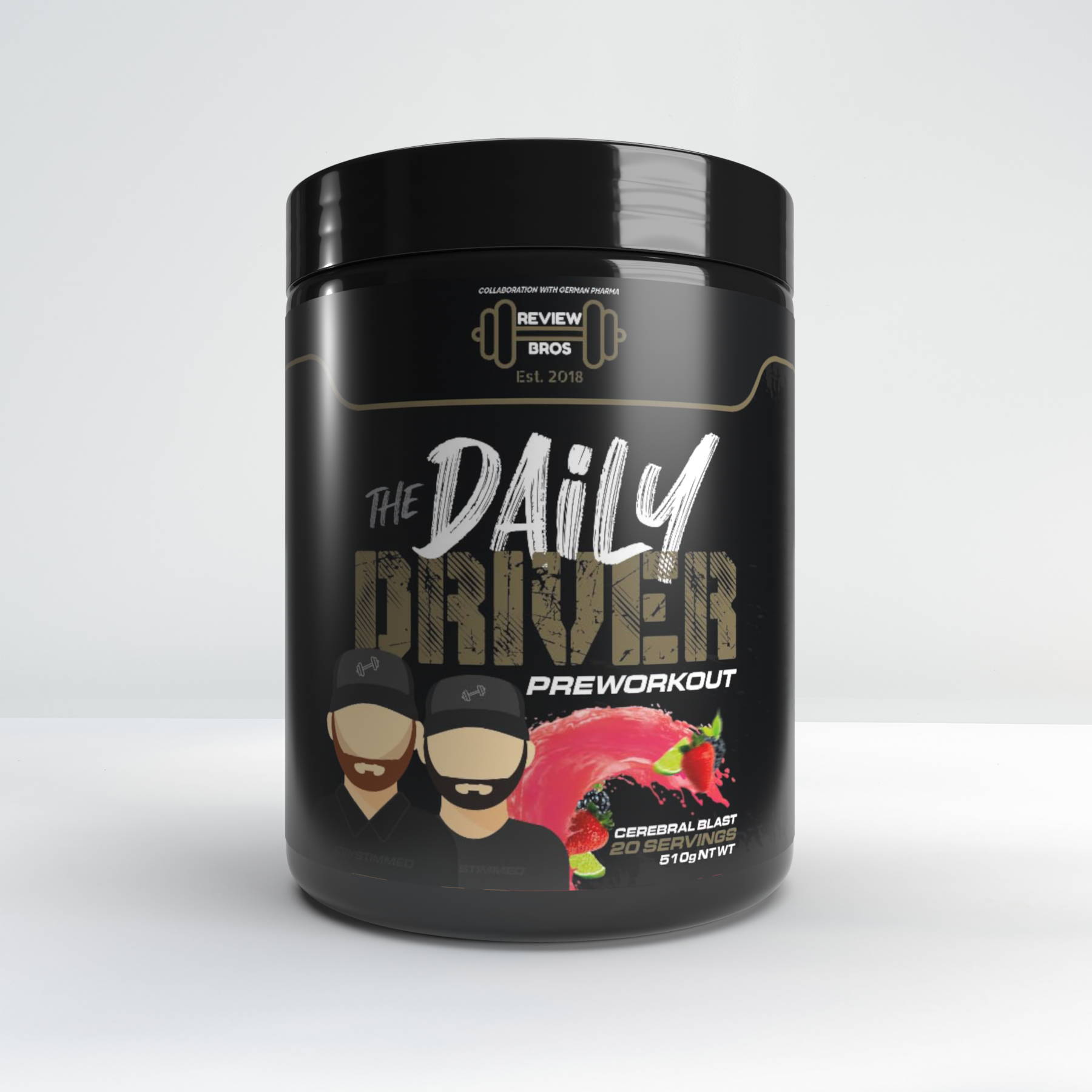 Shop The Daily Driver
Back to blog

Join our email list for exclusive offers and the latest news.