You're away from Free Next Day UK Shipping!

You're away from Free Next Day UK Shipping!

Looking from the outside in, all forms of sports don’t look too difficult and therefore many don’t apply their full mental effort when participating for the first time. However you soon learn in order to reach higher levels in any sport you need to take your training seriously and focus on the task at hand.

Pure Labs have taken the key word being ‘focus’ seriously and formulated a state of the art Nootropic Formulation in which consists of several ingredients all of which have been backed by thorough research to provide: enhanced focus, no more ‘foggy brain’ and improve the level of blood flow to the brain. Do you live an insanely active lifestyle? Often find that your mind is Foggy, Tired and Cluttered? Often those who use a lot of mental energy day in and day out- Working in stressful circumstances, whether this is working/studying/upholding family life or anything else, life can often need your A game, so bring it!

Pure Labs present their very first nootropic supplement, ‘Nootropix’. A nootropic is a substance that enhances cognition, memory and facilitates learning. Pure labs have combined 12 ingredients of brain empowering substances to maximize your brains potential and give you the brain power to get as much out of your mind as possible! This product is aimed for those who suffer from long days and nights of work, those who spend a lot of time studying and those who wish to give themselves the edge!

L-Tyrosine The cornerstone of this mental arousal supplement, L-tyrosine is a non-essential amino acid that is readily converted into L-dopa, a precursor of dopamine. This neurotransmitter chemical responsible for the brains reward and pleasure centers. Dopamine regulates movement and emotional responses with those deficient in the chemical being proven to be more prone to addiction and even Parkinson’s disease.

L-Theanine Another amino acid deprived from green tea leaves, but before you think this will cause a stimulant effect, Theanine is actually proven to targeted effects with the mind. Theanine provides a cognitive lift by providing a sharpened focus and natural energy coupled with an anti-anxiety effect, allowing the brain to simple fine tune its performance throughout the cloud of everyday life.

Avena sativa extract This is rapidly becoming more and more popular supplement, extracted from oatstraw this supplement is known for its soothing effect on the brain and nervous system. This supplement is also showing promise in treating conditions such as chronic fatigue and anxiety.

Phosphatidylserine Often abbreviated to ‘PS’ this is a important phosolipid membrane component that plays a key role in cell cycle signaling, with PS being used in a variety of environments from helping fight dementia in the elderly to improve sporting performance by reducing the endocrine response to exercise stress. Those supplementing PS should expect a better hormonal balance and a better response to mental stress.

Cats Claw Extract A very popular supplement for stimulating the immune system into action! Those supplementing cat’s claw extract do so for its ability to fight chronic fatigue syndrome, Alzheimer’s disease and many others namely osteoarthritis and digestive system disorders.

Bacopa monnieri A proven supplement to fulfill two main roles and they are improve cognition (by reducing anxiety) and improve the formation of memory. This makes it an absolutely ideal nootropic by stimulating both the dopamine and serotonergic systems, increasing communication of the neurons within the brain and even increases the level of growth within nerve endings, leading to faster and more efficient thinking.

Alpha GPC Quite possibly the most used cognitive supplement amongst athletes for its properties. Alpha GPC is a cholinergic compound used for its cognitive promoting properties as well as enhancing athlete’s power output. Alpha GPC is often taken for those later in life to prevent the onset of diseases such as Alzheimer’s and acute cerebrovascular.

Huperzine 1% Huperzine is an enhancing enzyme that degrades the learning neurotransmitter acetylcholine, which make a relative increase occur. Huperzine belongs to the cholinergic class of molecules similar to Alpha-GPC also included in ‘Nootropix’.

L- Leucine Those who under a lot of stress both mental and physical will often use this amino acid whether it be in Branch chain amino acids or protein. Leucine is the essential amino acid that stimulates the mTOR pathway, which is essential for monitoring cellular stress and energy levels.

Vinpocetine A chemical extracted from the plant Vinca Minor, this extract chemical has been proven in a double blind controlled study (the gold standard of study experimentation) to improve blood flow to the brain, leading to an increase in memory enhancement and cognitive function.

Pterostilbene This is an ingredient deprived from the compound resveratrol, chemically altered to make it more potent and giving it a better absorption then resveratrol. Pterostilbene in low human doses (10mg or less) has been held to improve cognition.

Vitamin B6 (Pyridoxine) Vitamin B6 is a very popular supplement for those wishing to boost immune system function, another key function of vitamin b6 is the stimulation of co-emzymic function activity, which includes everything from hormone function, emotional disorders and fatigue. It would only seem necessary to include vitamin b6 in a perfect mental health supplement.

This combination of ingredients is aimed to enhance memory, increase the quality of signalling within the brain which enables you to process information quicker and react faster especially under stressful circumstances such as long nights or those who live active and on the go lifestyles. 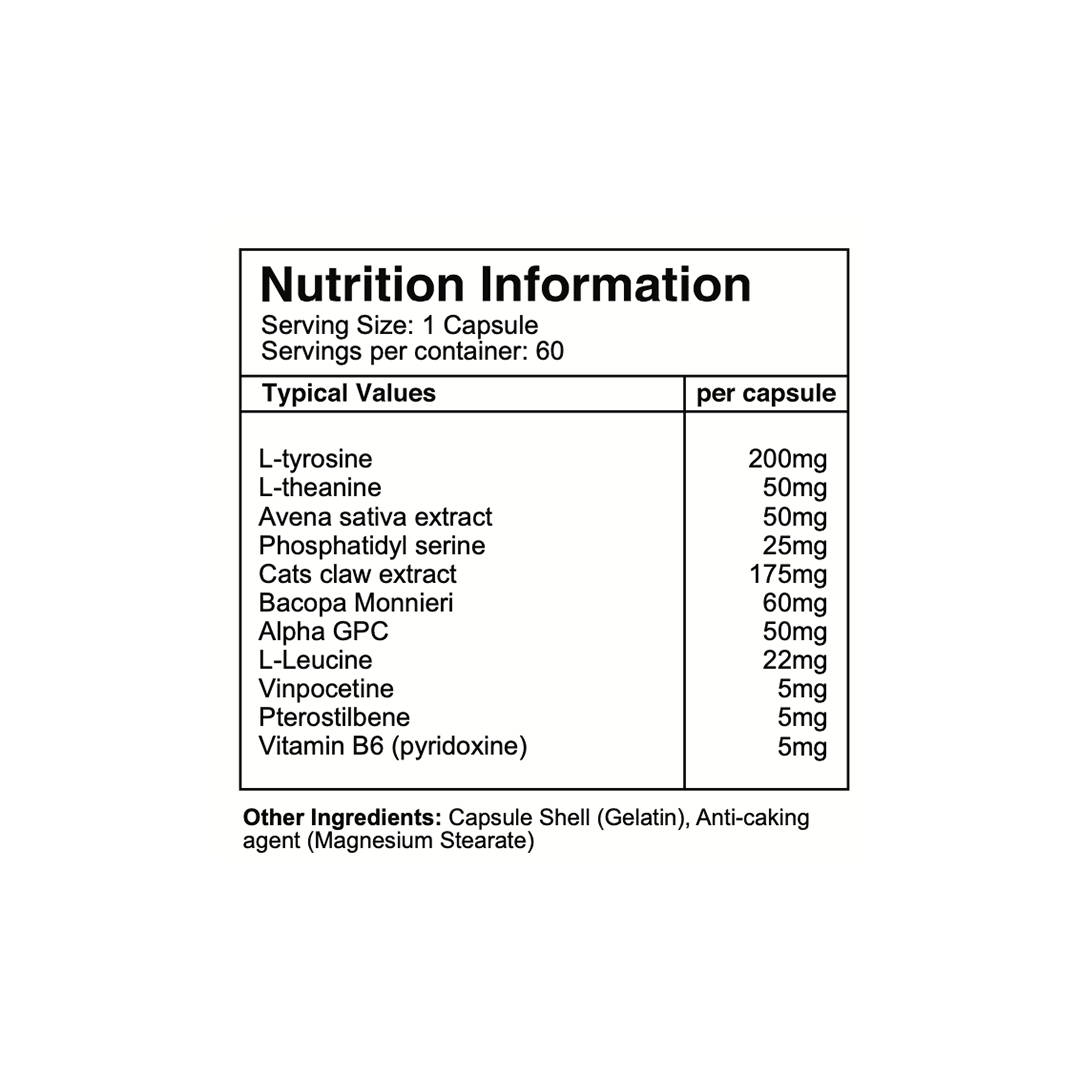 Have a question about this product?

Our customer service team will be happy to help you.

We ship our products worldwide

Check out with confidence